What Happened to the Trees? 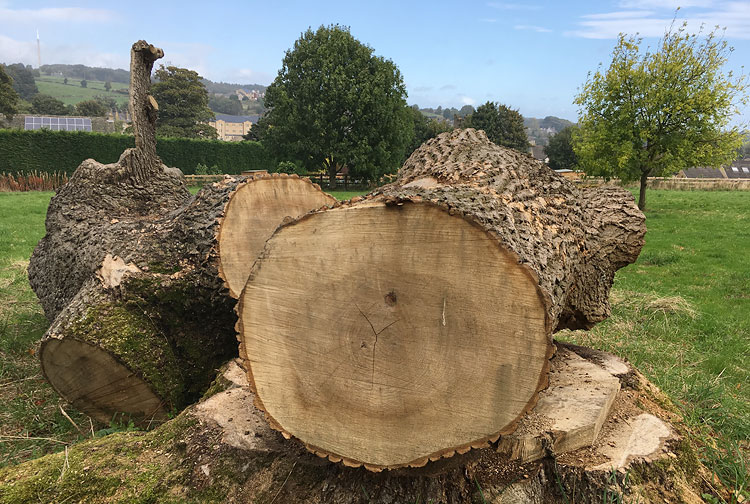 The Friends of Churchfield Committee had some concerns over the health of the two large ash trees in the top section of the field. At the beginning of July, along with David Wilde, Countryside Officer for Denby Dale, we asked a tree surgeon to come and inspect them.

He did indeed confirm that the two large Ash trees were showing signs of a fungal disease, which was making the wood brittle and therefore likely to drop branches. This could happen with very little warning, making them a danger. For clarification this is not the Ash dieback disease we have seen reported on TV so often in recent years. It is a completely different disease, but still just as serious. His recommendations were the removal of these trees completely.

Following this report David Wilde formally reported these findings to both Denby Dale Parish Council and Kirklees Metropolitan Council, as they are the lease holder and landlord respectively. Because one tree was particularly poorly in the opinion of the tree surgeon, David and I took the decision to go into Churchfield the following morning and cordon off the area until after an official inspection by Kirklees Forestry Department could be carried out. This was just before a windy weekend so we felt this action necessary.

Kirklees Forestry Department, after inspecting all the trees in Churchfield, confirmed problems, including disease, in four of the trees, our two Ashes and a Sycamore and Horse Chestnut at the roadside, and gave recommendations for action.

These trees all had Tree Preservation Orders attached to them but permission was quickly given to carry out the removal of the unsafe tree and to remove deadwood from the sycamore. In carrying out the work it was discovered that the other Ash was also dangerously weakened, as was the Sycamore. It was necessary to cordon off a large area again, as a result of which the field could not be mown. In the event three of our oldest trees had to be felled.

All in all, this has been a pretty testing time for us, and it is sad to see the loss of trees which we estimated to be in the region of 200 years old. The field looks quite different without them.

On a positive note, the birdlife that decided to nest in Churchfield, using the nest boxes fixed to the trees in question, finished nesting and produced their chicks. They were not affected by the work that was carried out and we have already found alternative sites in Churchfield for them to nest next year. We have left the remaining tree trunks in place, which will provide a new wildlife habitat as these start to dry out and decompose naturally. It will be interesting to see how they change over the years, and to see what birds and other wildlife they attract.

In the past couple of years we have planted more trees in Churchfield, including an elm and two rowans, besides the fruit trees we planted earlier. Unfortunately these trees are young saplings and it will be many years before they reach anything like maturity. They will never be as tall as those ash trees and that will be a sad thing. As a conservationist and wildlife lover I am always sad to see trees removed without good reason, but all living things have a life span and I guess we have to accept this was likely to happen at some stage. Churchfield committee is now working with the Countryside Officer on sourcing suitable native trees to replace the ones we have lost.